A study was conducted with three chickpea genotypes Pusa 256 (National Check-North Zone, recommended for late planting), RSG 888 (West Zone, drought tolerant) and JG 11(South Zone, recommended for early planting and rainfed cultivation) to study the effect of high temperature stress on various biochemical parameters (antioxidant enzymes and protein profile). A polypeptide of approximately 40 kDa was observed in all the three genotypes in response to heat stress. In addition two polypeptides of approximately 24 and 68 kDa were found to be differentially expressed in response to heat stress in RSG 888 only. In all the chickpea genotypes high temperature stress also showed increased activity of antioxidant enzymes such as POX, GR, and SOD. RSG 888 possessed better seedling growth parameters under high temperature as compared to Pusa 256 and JG11.

Chickpea ( Cicerarietinum L.) is the world’s most widely cultivated pulse crop with an area of 10 million hectares. India is the largest producer of chickpea contributing to around 70% of the world’s total production.

Chickpea production is significantly affected by abiotic factors like temperature and drought. Changes in seasonal temperature affect the grain yield of chickpea, mainly through physiological and developmental processes.These processes in turn combine to cause altered phenology, reproductive failure and accelerated senescence. At the physiological level, this damage translates into reduced efficiency of photosynthesis, impaired translocation of assimilates and loss of carbon gain [3]. High temperature at reproductive stage leads to forced maturity and poor biomass in chickpea [4]. As temperature and water stress occur frequently and affect most habitats so plants have developed several strategies, which allow them to survive the adverse conditions to avoid stress [5].

The extreme temperature stress causes a rapid and excessive accumulation of reactive oxygen species (ROS). These ROS viz. superoxide radical, hydrogen peroxide, hydroxyl radical and singlet oxygen together constitute the oxidative stress. These ROS under stress conditions react directly with lipids, proteins and nucleic acids and cause lipid peroxidation mediated membrane injury, protein degradation, enzyme inactivation, pigment bleaching and disruption of DNA strands [6]. Plants have developed the scavenging mechanism of ROS categorized as enzymatic and nonenzymaticdefence system. When ROS increase, chain reactions start in which superoxide dismutase (SOD), metalloenzyme catalyses the dismutation of O2 radical to molecular O2 and H2O2 . The H2O2 is then detoxified either by catalase/peroxidase or in ascorbate glutathione cycle which involves oxidation and reduction of ascorbate and glutathione through ascorbate peroxidase (APX) and glutathione reductase (GR) action [6]. Catalase (CAT) reduces H2O2 into H2O and O2 , whereas peroxidase (POX) decomposes H2O2 by oxidation of co-substrate such as phenolic compounds. The equilibrium between the production and scavenging of ROS may be perturbed under adverse abiotic stresses thereby reducing crop yield.

>&nbsd&nbsd Heat stress induced HSPs synthesis also leads to acquired thermotolerance [7]. Heat shock proteins are molecular chaperones that regulate the folding, localization, accumulation and degradation of protein molecules in both plant and animal species. They play a broad role in many cellular processes, which impart tolerance to multiple environmental stress treatments [8]. HSPs can also sustain the normal folded state of proteins, degrade misfolded proteins, stabilize polypeptide strands and prevent protein inactivity [9]. The major HSPs synthesized in eukaryotes are classified into five conserved classes: HSP100, HSP90, HSP70, HSP60, and small HSPs (sHSPs) of 15-42 kDa [10]. Among these families sHSP is the most abundant and diverse group found in plants. The production of these sHSPs is correlated with stress tolerance and with a potential to protect cells from stress damage.

Cultivated chickpea has a narrow genetic base making it difficult for breeders to produce new elite cultivars with durable resistance to major abiotic stresses. The main objective of this study is to identify a genotype suitable for high temperature stress on the basis of various physio-biochemical parameters.

The experiment was conducted with three chickpea genotypes (Pusa 256 National Check North Zone, RSG-888 West Zone, JG-11 South Zone). Sowing was done in the 6 inch pots under glass house condition in the National Phytotron Facility for 15 days at normal temperature 25°C (NT). After 15 days chickpea genotypes were transferred from glasshouse to phytotron chamber and exposed to normal (25°C) and high temperature 350 (HT) stress. The temperature treatment was given up to 30 days. Collection of shoot and root samples was done at various stages of growth i.e. 5, 10 and 15 days after treatment for various biochemical and physiological observations.

1 gram of fresh leaves of chickpea was finely powdered with the help of liquid nitrogen and to it 5 ml of extraction buffer (1M tris-Cl pH-6.8) was added. The content was centrifuged at 6000g for 10 minutes at 4°C. After centrifugation. 5 ml of prechilled solution containing 50% acetone 50% TCA (10%) and 60 μl β-mercaptoethanol was added to supernatant and the whole content was kept at 4°C for overnight, and again centrifuged at 600g for 10 min. at 4°C. The pellet was collected and washed three times with acetone containing 0.07% β-mercaptoethanol, dried and dissolved in extraction buffer for overnight.

The quantification of protein was done by using Lowry’s protein estimation method. After quantification suitable aliquot of the extract was used for protein profiling on SDS-PAGE [11].

Enzyme extract for peroxidase, glutathione reductase and superoxide dismutase was prepared by first freezing the weighed amount of leaf samples (1g) in liquid nitrogen to prevent proteolytic activity followed by grinding with 10 ml extraction buffer (0.1M phosphate buffer, pH 7.5, containing 0.5 mm EDTA). After grinding solution was passed through 4 layers of cheesecloth and filtrate was centrifuged for 20 min at 15,000g and the supernatant was used as enzyme [12].

Peroxidase [EC 1.11.1.7] activity was assayed by recording the increase in absorbance due to oxidation of guaiacol to tetraguaiacol [13].

Glutathione reductase [EC 1.11.1.7] activity was assayed by recording the increase in absorbance in the presence of oxidized glutathione and DTNB (5, 5-dithiobis-2-nitrobenzoic acid) [14].

Superoxide dismutase [EC 1.15.1.1] activity was estimated by recording the enzyme induced decrease in absorbance of formazone made by nitro-blue tetrazolium with superoxide radicals [12].

The SDS PAGE analysis of control (normal temperature i.e. NT) and high temperature (HT) treated Cicer seedlings at three different treatments revealed variations in protein profiles. In Pusa 256 and JG11 under high temperature (10 days after treatment) a prominent band of approximately 40 kDa was observed (Figure 1) in shoot however no visible difference were observed in root tissue. 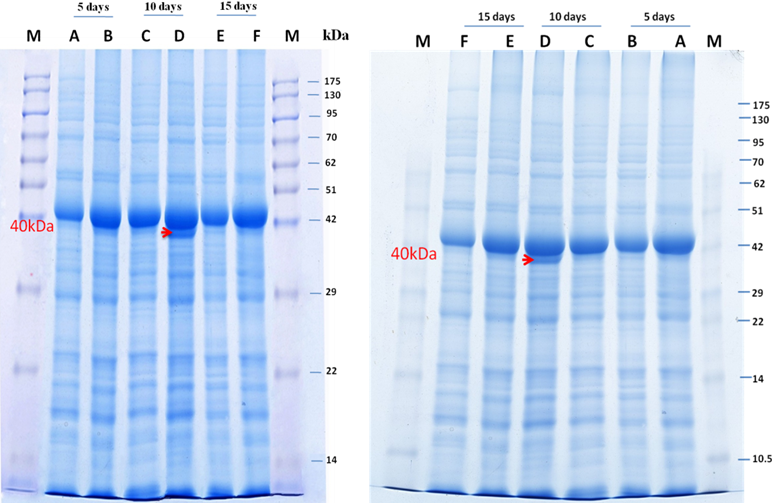 Genetic variability for protein profile was observed under high temperature treated chickpeas seedlings of three different genotypes. In addition to these, other minor quantitative differences were also observed. One universal means of improving thermo-tolerance is the production of heat shock proteins (HSPs) [15]. Both small HSP [16] and HSP 101 [17] are required for improved resistance of heat shock in plant cells. Since the molecular weight of prominent bands match with that of HSPs i.e. HSP 70 and sHSPs (15-42 kDa), these proteins could possibly be HSPs however further conclusive evidence is needed to confirm these as HSPs. The induction of sHSPs depends on the severity of the stress and its duration [18]. Therefore its induction pattern is variable among these genotypes. Plant species adapted to temperate environment (soybean, maize, pea and wheat) begins to synthesize HSPs when tissue temperature exceeds 32 to 33°C. Tissue specific as well as development stage specific induction and repression of several HSPs have been observed [19].

Data on peroxidase (POX) activity is reported in Figure 3. POX activity increased under normal as well under high temperature and showed positive correlation with the growth of the seedlings.

A similar trend was observed in the root though GR activity parse in root was lower as compared to shoot. In case of root, RSG 888 maintained higher GR activity under both normal as well higher temperature followed by JG 11 and Pusa 256. It was also observed that GR activity was maximum in RSG 888 genotype during HT at all the stages i.e. 5, 10 and15days after treatment.

A similar trend was observed in the root though SOD activity parse in root was lower as compared to shoot. In case of root, RSG 888 maintained higher SOD activity under both normal as well higher temperature followed by JG 11 and Pusa 256. It was also observed that SOD activity is maximum in RSG 888 genotype during high temperature at all the stages i.e. 5, 10 and15 days after treatment.

Tolerance to high temperature stress in crop plants has been reported to be associated with an increase in antioxidant enzymes activity [20]. In the present study all the antioxidant enzymes i.e. POX, GR and SOD showed increased activity under high temperature as compared to control at all the three stages i.e. 5,10 and 15 days after treatment in shoot and root in all the three genotypes. Increase in enzyme activity may be induced by the present reactive oxygen species, thus providing indirect evidence for the extent of generation of reactive species [21]. Sairam., et al. reported significant increase in SOD activity under temperature stress in wheat genotypes, and a greater increase in tolerant genotype C 306 has been reported, while the susceptible genotypes showed lower activity [22]. This shows that the tolerant genotypes combated the ROS by maintaining efficient antioxidant mechanism.

Similar results in late sown heat tolerant wheat varieties have been reported [23]. Higher activity of various antioxidant enzymes in temperature tolerant genotypes of various crop species has also been reported by various workers [22,23,24,25]. Increase in CAT and POX activity under heat stress was also observed by Kaur., et al . [26] in B.juncea species. The basal activity of APX was also found higher in thermo tolerant genotypes i.e. BPR-542-6 when compared to thermo susceptible genotypes i.e. NPJ-119. Gulen., et al . [27] reported effects of high temperature on the activity of peroxidase (POX) isozymes and leaf proteins. Conversely, total protein content was decreased by heat stress. Although antioxidant enzymes generally do play a role in the antioxidant capabilities of the plant there is obviously some variability in enzyme among species and genotypes.

The RSG 888 possessed better seedling growth parameters compared to Pusa 256 and JG 11 and can be useful for combating short period of heat stress during initial stage of plant growth. These newly synthesized proteins might play an important role in thermotolerance against high temperature stress.

6.    Davies W J and Zhang J. “Root signals and the regulation of growth and development of plants in drying soil”. Annual Review of Plant Physiology and Plant Molecular Biology 42 (1997): 55-76.

Copyright: © 2016 ArunaTyagi., et al. This is an open-access article distributed under the terms of the Creative Commons Attribution License, which permits unrestricted use, distribution, and reproduction in any medium, provided the original author and source are credited.